The ANZSMS recognises contributions to mass spectrometry by the awarding of three individual medals and one award. These are separate and distinct, with different procedures and requirements for each. 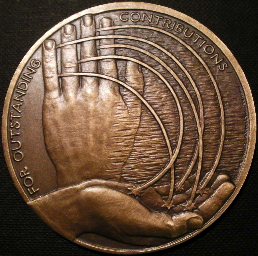 The ANZSMS medal honors individuals deserving special recognition by reason of their outstanding contributions to knowledge in the biological, chemical, engineering, mathematical, medical, or physical sciences relating directly to the exploitation, application or development of mass spectrometry. 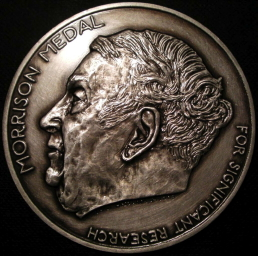 The Morrison Medal honors the contributions of Professor Jim Morrison to the development of mass spectrometry in Australia. It is awarded in recognition of significant achievements in an area of mass spectrometry. Consideration will be given to scientists with an international reputation and who have had an association in some way with Jim Morrison.

A bronze-colored medal with a certificate commemorating the award. 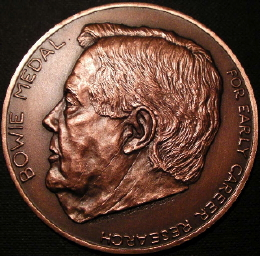 The Bowie Medal honors excellence in research in any area of mass spectrometry by a young Australia or New Zealand researcher.

Professor Michael Guilhaus was an innovative instrument designer who constructed, at the University of New South Wales in Sydney Australia, prototype orthogonal-acceleration time of flight mass spectrometers starting in the late 1980’s. This technological development, now widespread in commercial Quadrupole Time of Flight Instruments, was pioneered by Michael. In recognition of this, Michael was the inaugural recipient of the Australian and New Zealand Society for Mass Spectrometry (ANZSMS) Morrison Medal and was awarded the Curt Brunnée Award from the International Mass Spectrometry Foundation; the only Australian to be so-honoured.

A research award will be presented at the biennial conference of the ANZSMS in 2017, to an early career researcher who principally works in Australia or New Zealand. The award is designed to support innovative research in the field of mass spectrometry. To be considered for the Michael Guilhaus Research Award, a researcher must provide a detailed research proposal with supporting documentation and submit an abstract to present their research at the next ANZSMS conference. In memory of Michael’s passion for instrument development, preference may be given to projects that involve instrument development or modification, but any application that proposes original science in the field of mass spectrometry will be considered for the award.

Promote instrumentation or other innovative mass spectrometry developments or research within Australia and New Zealand for an early career scientist. Provide funding to initiate/continue a research project described in the application.

Applicants should collate documentation and submit this as one PDF, via email to the ANZSMS President, by 11.59pm on the 29th of April 2022.

Judging will be by the ANZSMS Executive Committee or esteemed panel chosen by the committee (4-6 members); and will usually include the convener of the next ANZSMS conference.

Frequency of the Award

The award is made at most every two years and subject to availability of funds.

Announcement and Presentation of the Award

The announcement and presentation of the award will be made at the biennial meeting of the ANZSMS. A representative from the financial sponsor for that year or ANZSMS President will usually present the award.

The Michael Guilhaus Research Award will include a certificate of recognition, and AUD$2,000 paid to the recipient’s University, which is to be used for the research project. In accepting this award, the institution will agree not to charge overhead on the funds.